You'd think working in monochrome would be easy--yes? I have found it to be easier said than done.

And so, for this week's linkup to Simon's Monday challenge, I took the easy way out and went with a black and white theme.

It started with a background paper (Paper Studio B/W Abstract), layered under a page trimmed for the base from Prima called Epiphany.

The luna moth was printed from some clip art then cut-out and pasted and embellished with gray paint and black and white pens (Sakura gelly rolls and Pitt big brushes).

There's a little washi tape, some Remnant Rubs, and a stamp from a set by Tim Holtz called Stamp Collector.

One of my favorite tools used for the black shading around the moth is a Derwent Sketching pencil--Dark Wash 8B.
7 comments:

One of a Kind

Have you ever wondered what it would look like to stamp several Tiny Things* with archival ink on hot press watercolor paper cut in the shape of a tag then filled in with colored pencils in rainbow fashion?

Me, too! I'm linking to Simon, the Monday challenge is "Stamp on it."

*Stamps by Tim Holtz (except for ant).
8 comments: 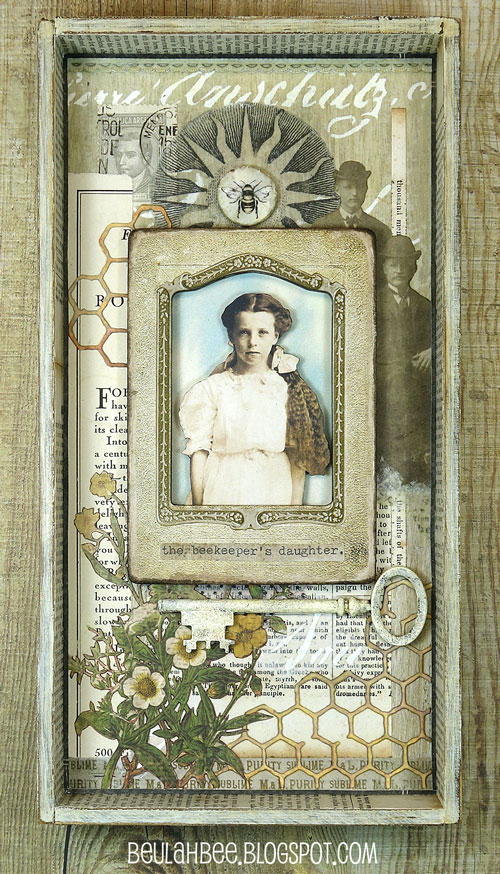 I've made a Vignette Tray assemblage/collage to share with you today. I chose the smaller tray size and used whiting (a wood stain) and some light sanding to alter the surface. This technique is known as "pickling."

I used this finish on a CHA 2017 project and here's the link if you'd like to see another example. 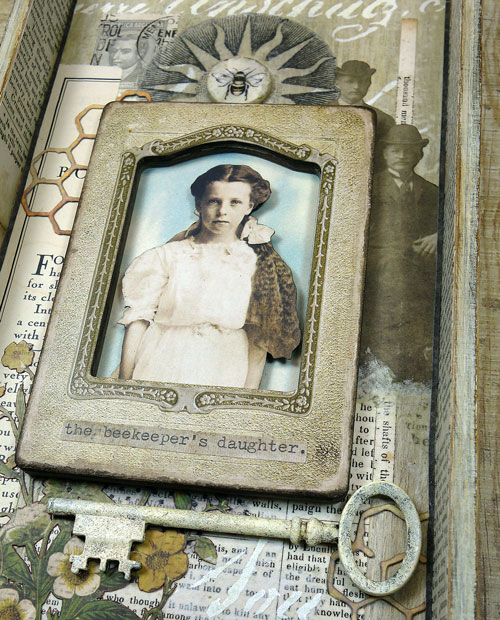 A Found Relative was cut-out and placed between a sandwich of two Baseboard Frames and vintage book paper of a blue sky was attached to the back.

The background consists of the stained wood of the tray along with vintage book paper text.

The large white script was made using a home-made stencil and white paint on Plain Collage Paper.

By using the collage paper, I have lots more control over where it's placed and after pasting down it becomes almost invisible. 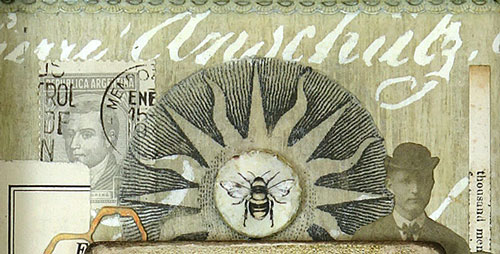 The tiny bee on top is an image transfer on the backside of a vintage button (I filled in the holes with paste medium).

The sunburst is also a transfer and the image came from a Trader Joe's flyer.

The gentlemen were cut from French Industrial paper stash and there's also a vintage postage stamp. 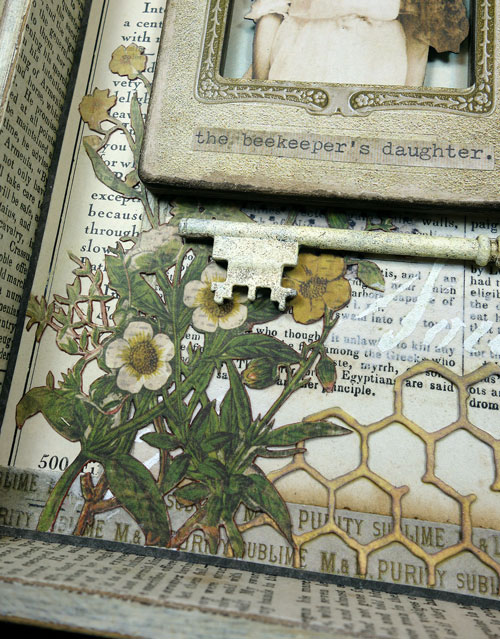 The flowers were cut from the Wallflower paper stash and that's an Idea-ology key dabbed with white paint and dark ink to distress it.

The honeycomb was made with a Tim Holtz Mixed Media thinlet.

This piece was a long-time in the making and there were several versions before I finalized it.

Funny thing, though--I ended up returning to my original idea. I guess I needed to try out all the possibilities before I could fully embrace the design.
5 comments: